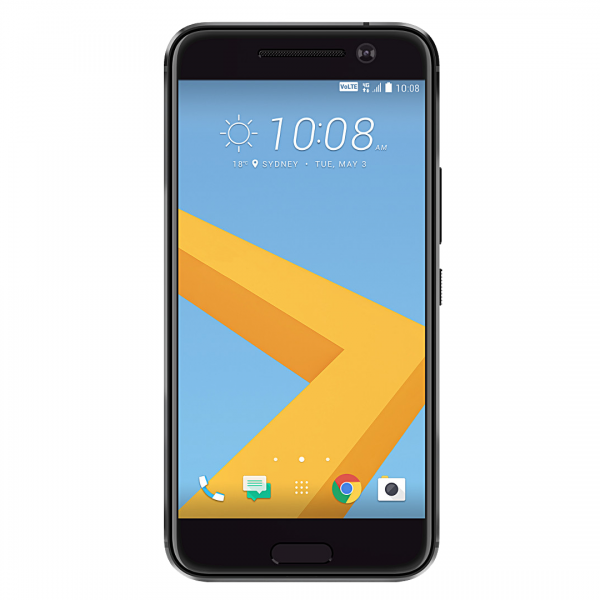 The 10 is HTC’s latest hope of finally making their big splash into the mobile world. They started with the original HTC One which, with some success, eventually evolved into the M9. However, users often criticized the company for lacking changes with each new iteration. HTC just seemed to lag behind their competitors in terms of features. With the HTC 10, however, the company seems to have listened to a lot of complaints and have worked hard to make the best phone they could for their consumers. Everything about this phone has improved.

The HTC phones have always had premium-feeling design, but they’ve really outdone themselves with the 10. Along with the solid aluminum uni-body, it has chamfered edges and gloss lines that run across the width of the body. It’s a bit of a mash-up of the older iPhone design with the newer design, but it works. Many customers complained about how slippery the previous designs were, so the new edges are going to help with how the phone sits in your palm. It also has rounded corners and a display that nearly reaches edge-to-edge. It’s clearly a premium phone built with premium products.

It now has a fantastic 5.2” 1440x2560 display with 565ppi. There’s a slight imbalance between the red, blue, and green colours of the display, resulting in a blueish or pinkish tinge at certain angles. The trade off won’t be a deal-breaker for most people, considering you’ll be getting such a clear and sharp screen. HTC’s also upped the brightness of the 10. While it’s still missing the automatic extra-bright feature of rivals such as the Samsung Galaxy S phones, it’s definitely more usable in sunlight now.

HTC finally added a fingerprint sensor between the capacitive menu and return buttons, which have both been relocated off the screen, closer to the bottom of the phone. Speaking of relocation, the 10 will no longer feature the famous front facing HTC BoomSound speakers. It will instead be located at the top and bottom of the phone, which has come as a disappointment to a lot of customers. However, HTC added a dedicated amplifier, so it hasn’t abandoned the speaker quality and it still sounds better than its rivals.

It will also feature the typical setup of the latest Snapdragon 820 processor paired with 4GB of RAM. Reports are that the phone has absolutely no problem handling tasks or graphic-heavy video games, either. HTC has also packed in a 3,000mAh capacity battery. While many will claim this will mean customers will be able to use this phone for 2 straight days on a single charge, the truth of the matter is that your mileage will vary. HTC also gave customers the choice of using microSD cards to fill their phone with movies or videos and take as many photos as they want with the new HTC 10 camera.

HTC has tried time and time again to perfect their camera technology, but they’ve never come as close to it as they have with the 10. The company decided to drop out of the MP competition and focus instead on software. It now has a 12MP rear camera and a 5MP front camera. Not to fear, though. With UltraPixels and a wider aperture, the camera lets in plenty of light. Depending on how much you use your camera, you’ll probably find that you take most of your photos in environments with low light. The HTC 10 really shines here, producing quality photos even at night.

The HTC 10 is a great phone, but it’s far from being the best phone of 2016. However, that has not deterred many customers from being persuaded into coming back to HTC. As long as the company keeps up with fine-tuning their devices, they could easily come back as one of the biggest players in the mobile world. Unlock HTC 10