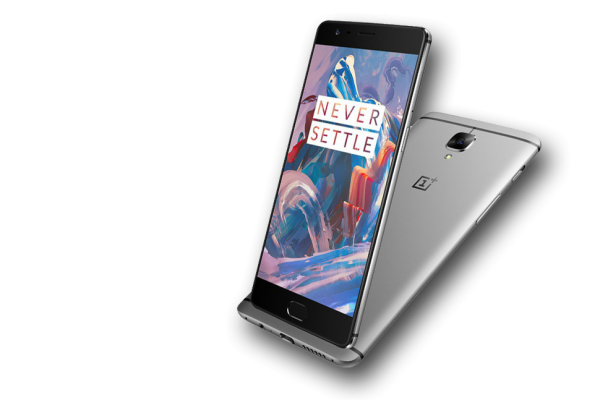 The Chinese brand’s recently released flagship has a beautiful, premium design this year. Gone is the sandstone back, the plastic bezel. The OnePlus 3 now looks like the lovechild of the iPhone, HTC, and the S7 phone. Not only does it look like a premium device, but it feels like one, too.

This phone has a 5.5” AMOLED display that does not boast QHD resolution. While other flagship phones have been offering better and better displays with each generation, OnePlus seems to think that 1080x1920 is enough. Given the phone’s 6GB of RAM and the Snapdragon 820 processor paired with a 3000mAh battery, the company may have chosen the correct route. The OnePlus 3 can easily be a day-and-a-half-phone with moderate use. Plus, with the new Dash Charging feature that the company incorporated, you can very easily and quickly top up. The company boasts 63% charged in just 30 minutes. The great thing about this feature is that the phone does not heat up as much as other fast chargers, and it also seems to retain its speed even when the phone is being used while charging. Unfortunately, it does not support wireless charging right now, which means you’ll be working with cables for little while longer.

It also has the mark of every superphone: a fingerprint sensor. Located on the front of the phone in between two capacitive buttons is the home button which doubles as a fingerprint security system. It’s quite accurate and reacts very quickly, rivalling--and claimed by OnePlus to even beat--Apple Touch ID’s response time. The capacitive buttons can be programmed for different settings, too. Thanks to OnePlus’ own OxygenOS, an overlay of Android Marshmallow 6.0, there are a multitude of customizations that you can do to really make the phone yours.

The phone itself comes with a screen protector--a small but considerable thought by OnePlus. The volume rocker and notification slider are both located on one side of the phone, while the power button is located on the other side. Speakers and mics are on the bottom, and antenna lines run across the top and the bottom of the phone, adding additional accents to the design.

It has the ability to utilize two SIMs, making it a dual-SIM phone. This means that whether you’re travelling or have a business phone, you wouldn’t ever need to carry an additional phone. Unfortunately, the second SIM card slot does not double as a microSD card slot, so you’ll still be missing out on expandable memory. Carl Pei, CEO of OnePlus, says that a microSD card slot is not a good thing to ask for from fans and that it is “not a good user experience.” Given Samsung’s move to add back the ability of memory expansion, it looks like many fans disagree with Pei’s sentiment. Surprisingly, the company offers only one model for purchase: 64GB. Fans will not get the choice of 32GB or 128GB and will have to make do with only 64GB.

The phone’s camera specifications look great on paper, but in reality it’s only decent when compared to others like the S7. However, considering the prices of each device, the OnePlus 3 camera is fantastic. It has a 16MP rear camera and an 8MP front snapper. The company says it’s hard to take a poor photo with the phone--a true statement as long as you have enough light. In low-light conditions, you’d have to tweak the settings a little bit.

Despite being almost half the price of its competitors, the OnePlus 3 demonstrates high-quality hardware and software, too. Just as any other phone that’s out today though, it has its flaws. The camera isn’t stunning, the battery is sealed in, and most importantly: you can’t add external storage. However, in just three generations, OnePlus has improved their phone by so many miles that we’re really looking forward to their next phone. Just as Samsung added a memory card slot to the S7, we’re hoping that OnePlus will add one as well. It can actually compete in the market now with big hitters like the S7, S7 edge, iPhone 6S Plus, and the HTC 10. Plus, the company has now grown enough that they finally removed the pesky invitation system. That means that as of the OnePlus 3 official release date, you can go directly onto their website right now and purchase yours.