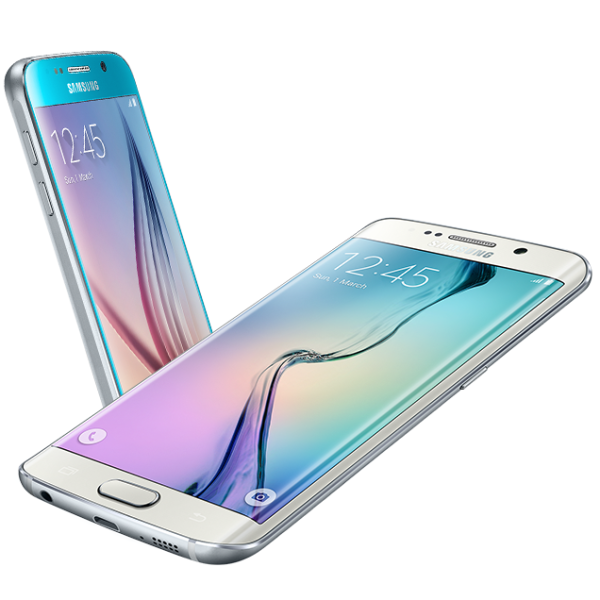 Samsung has practiced building a metal-clad device that has resulted in the Galaxy A3, A5, and Alpha. While these phones didn't bring a lot of attention and fanfare to Samsung's efforts, the fans of the metal-framed Note 4 are certainly thankful for the change. The overall shape is familiar to Samsung users. The screen retains the 5.1" size from the Galaxy S5, however the resolution is now at 2560x1440, placing pixel density at 577 ppi. Below the screen, the recent apps, home, and back buttons are the same way that they have in the Galaxy S5. The biggest controversial change is the lack of a removable back cover. The back is built out of glass and it is part of the Samsung Galaxy S6's body. This means 3 things: no removable battery, no expandable memory, and a SIM card slot on the top edge of the phone. A protruding rear 16-megapixel camera and LED flash joins the glass back of the phone. Other changes from the S5 to the S6 include moving the headphone jack to the bottom of the phone and the return of the micro-USB charge/sync port. Both phones will come in either gold, black, and white, and in addition, the Samsung Galaxy S6 will have a blue model, while the Samsung Galaxy S6 Edge will have a green model. Unfortunately neither S6 or S6 Edge will have IP67 water resistant rating, perhaps to allow the "Active" variant to be more an attractive model later on.

Samsung has chosen the Exynos chip over the Qualcomm Snapdragon 800 series line-up that has been on the recent Note 3, S5, and Note 4 devices. Time will tell if the battery efficiency and processing power will be better or worse than the outgoing Qualcomm chip. Fingerprint scanning has been improved to distinguish fingerprints by simply placing your finger on top of the button, rather than swiping. Wireless charging is supported out of the box, compatible with a wide variety of wireless charging pads. Camera upgrades from the S5 include a f/1.9 16mp sensor and as well as optical image stabilization. Self-portrait options are expanded with similar features from the Note 4. The 5 megapixel front camera features wide-angle selfies, with the ability to take the photo by tapping on the sensor panel beside the rear camera of the phone. The rear camera also has a setting to allow for selfies by automatically detecting a subject to take a photo. _________________________________________________________ The Samsung Galaxy S6 and S6 Edge follows the trend of Samsung's TouchWiz not being too different from the official Google version. Android's Lollipop OS will come with the phone. S health continues to be prepackaged with the phone, however most other pre-installed Samsung-ware on the S5 will not be on the S6 and S6 Edge when you turn the phone on for the first time. This helps keep the phone's look to be nice and clean. Fans of the super-fast Fleksy third-party keyboard will be happy to know that it will be included with the phone. Unfortunately Swiftkey and its great prediction will not be.

With the non-removable battery, knowing what's inside really matters. Both the S6 and S6 Edge have less capacity than its predecessor's 2800mAh; at 2550mAh and 2600mAh respectively. With the Galaxy S5 being a great 1-day phone, but an awkward 2-day phone, we will see if the change to a 2560x1440 screen, Exynos chip, and Lollipop will make up for the lost battery capacity. With the lack of expandable memory, the phone will come in 32/64/128GB capacities. In two weeks time, we will hear more from critics and reviewers of both devices. There are certainly great improvements over the S5, but there are also critical sacrifices made. For us, we will be able to unlock any GSM variant of these two phones! Unlocking the Galaxy S6 and S6 Edge is very simple. We will have unlocking available as soon as the device is released! Step 1: Find the IMEI of your device by dialing *#06# Step 2: Power off the device and place a SIM card that is from a different carrier than the original of the phone Step 3: If prompted for "SIM network unlock PIN", simply order on our page to get your code. Step 4: Type in the 8 Digit Unlock Code and enjoy your newly Unlocked Galaxy S6 or S6 Edge! This the official method to Unlock your Samsung Galaxy S6 and Galaxy S6 Edge! Your phone will be permanently Unlocked! Unlock Samsung Galaxy S6 Unlock Samsung Galaxy S6 Edge -Mike Cellphoneunlock.net
Back to article list