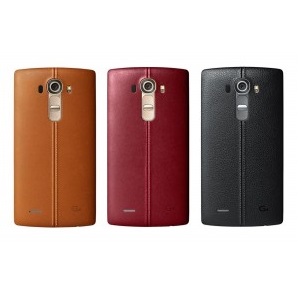 Hey everyone! We’re excited to announce that we are officially 7 days away from the unveiling of LG’s brand new flagship, the G4. As the time has passed, we’ve been getting more information about the G4—some from LG themselves, and some from other sources. Here are some LG G4 Rumors and Specs.

Read and Learn more about the LG G5.

Earlier this week, LG sent out invitations for the release of the G4. The invite features the back of the new phone with what looks like brown leather and real stitching. We’re hoping that LG will not only choose real leather, but also offer different colours in case brown is too dull for some. Judging from some leaked photos, the battery door looks removable and customizable. With more and more companies incorporating customizable battery doors and design into their phones, we’re glad to see LG jumping onto this wagon. The invitation also confirms that the camera, volume rocker, and power button are all situated in the back. This is no surprise, seeing as the design really worked well on the G3. Those with smaller hands or those who like to manoeuvre the phone with one hand will be pleased.

LG themselves have released a teaser video confirming that the G4 will have a superior QHD IPS display. When compared to other flagship phones, this one should have a brighter and better screen, but we’ll have to compare them side by side before making an official judgement. What we don’t know for sure is how thick the bezel of this phone will be. However, we’ve been hearing a lot about edge to edge displays for a while, so we’re sure that LG will be trying to push as far as they can into the “bezel-less” world. One thing’s for sure: we still do not have confirmation of the phone’s display size. We’ve seen sources saying 5.3 inches all the way to 5.6 inches. What size would you prefer? Will it also tout a slight curve like LG’s other phone, the G Flex 2? Check out their new video here: https://youtu.be/TVQT1lDukZU 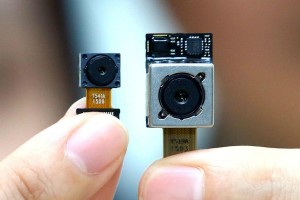 LG also released a teaser video featuring the camera. With the same charming background music, they reveal the aperture of the G4: f/1.8. This is going to let in more light for better photos even in lowly lit environments. It looks like this phone will edge out even the latest of Samsung’s phones in terms of the camera, proving to be a competent rival. It should sport a 16MP snapper in the rear and feature 8MP of resolution in the front, making it the highest front facing camera currently available. We’re also hearing that the camera module has been improved from a three-layered lens to one with six. It will also feature an IR filter to help with naturalizing the colours of photos. Take a look here: https://youtu.be/yZdWPqpVbEk

Because the G Flex 2 features Qualcomm’s Snapdragon 810, we believe that their flagship phone will also use the latest processor and have 3GB of RAM. We’ve also been hearing that it will have a removable 3000mAh battery. If this is true, we’re going to be very pleased, especially because Samsung just sealed in the batteries in their new successors in the Galaxy S line up. However, we’ve also been hearing rumours of LG’s own octa-core processor, Nuclun, and 4GB of RAM. We’ll just have to wait and see.

Apparently users in South Korea will get a one year warranty where the screen of the phone will be replaced free of charge if it breaks anything within one year, as well as receive a free 64GB microSD card. Although LG has confirmed that these offers are exclusive only to South Korea, we’re hoping to see some goodies for users in North America as well.

We’re very excited for the arrival of LG’s latest flagship. This phone is should have the latest specs and a fairly decent camera to boot. LG is touting their display as superior to others, so we have high hopes. With only 7 more days to go, we’re marking the days on our calendar. As for those who are excited for Lollipop, you wont have to wait because the phone will ship with Android’s latest update. Are there any specific things that you want in the new LG G4? Unlock LG G4 Unlock LG G4 T-Mobile Unlock LG G4 Stylus Unlock LG G4 Vigor
Tweet
Back to article list